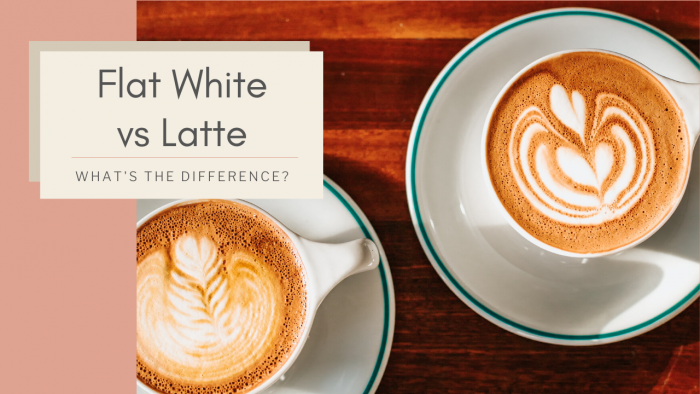 What do you get when you combine espresso and milk? Well, a lot of things actually, including popular coffee drinks such as mocha, cappuccino, and macchiato.

But today, we’re talking about two drinks that people tend to easily confuse with one another – Ah yes, it’s the infamous flat white vs latte debate!

No, a flat white isn’t just a small latte! If you’re in a coffee shop that doesn’t offer a flat white on the menu, a small latte can’t simply substitute for it. While this trade may be a good solution in such situations, you should know that you won’t be getting the same experience.

Then, what exactly makes these drinks so different? Is it the ingredients? The preparation? Or could it be the presentation? Well, keep reading to find out!

The similarity between a flat white and a latte begins with the presence of espresso as a key ingredient in both of their recipes.

Whether you’re making a flat white or a latte, you’re going to need at least one espresso shot. You can stop right there and serve either drink with a single shot only, but both creamy drinks typically have a double shot of espresso.

The reason behind the double shot is balance. Since the flat white and the latte have a lot of milk products involved in crafting them, the extra kick of espresso is required to keep the coffee flavor alive against the overwhelming taste of milk.

That being said, a flat white will end up giving you a stronger taste of espresso because it contains less milk when compared to a latte.

Some baristas in high-end coffee shops will replace espresso shots with ristretto shots in their flat whites and lattes to pack a more unique punch. Ristretto yields an equal amount of espresso but uses only half the quantity of water, so the coffee flavor is more concentrated.

In any case, whether it’s espresso or ristretto, coffee isn’t much of a differentiating point between a flat white and a latte.

As you may already know, milk is a crucial part of most espresso-based beverages. The flat white and the latte are no exception as they both have milk mixed in, however, the real difference lies in the way the milk is prepared and poured into the cup.

You see, milk in the coffee world breaks down into three layers when the barista steams or froths it:

The purpose of frothing or stretching the milk is to produce as much velvet microfoam as possible by blending the steamed liquid milk and the stiff froth. Otherwise, there would still be some microfoam but it’ll never make it into your drink as it’ll fade in the liquid or the larger bubbles.

For the flat white, a good barista will consistently mix the foam and the top froth back into the heated liquid. This is to create one whole seamless portion with a texture similar to that of the microfoam.

If you do the swirling and folding smoothly enough, you should end up with a mixture that looks like a glossy white paint. This particular technique is why flat whites are commonly said to have a velvety texture.

As for the latte, the procedure is more straightforward. The barista will simply steam the milk with a frothing wand to create the same three layers we mentioned above.

However, the heated liquid portion will make up the majority of the end drink, with about 4/6 parts being steamed milk and just ⅙ being microfoam plus froth.

When the steaming process is complete and it’s time to add milk into the drink, you can notice additional differences between a flat white and a latte.

For a flat white, the pouring process is way simpler. The barista will free pour the velvet microfoam into the espresso just after steaming it. Doing this immediately is very important to avoid the separation of the steamed milk if the microfoam is left to sit.

Correct timing will allow the microfoam to blend with the crema from the espresso to give you a flat, smooth, golden brown surface.

For a latte, on the other hand, the process requires a bit more skill. In most cases, the barista will use a spoon to hold back the foam while pouring the steamed milk into the espresso. Then, they may add the foam as it is or use it to do some latte art.

A flat white is known to be smaller than most espresso-based drinks, including cappuccinos, lattes, and mochas. It’s typically served in a 5-ounce tulip cup, but high volume coffee chains (such as Starbucks) usually have it in super-sized cups.

As for a latte, it’s traditionally served in an 8-ounce glass, not an opaque cup, so you can see the various layers of the drink. A lot of places also serve super-sized versions of the latte.

History of the Flat White

The origin of the flat white is actually an ongoing debate between New Zealand and Australia. Basically, both countries widely used the term “flat white” to describe milky coffee.

When the flat white came to life in the 1980s, the two countries started arguing about who came up with the name. They’re still at it!

History of the Latte

The latte is also a recent addition to the coffee world. It first appeared in the 1950s as a milder version of the cappuccino. Much like the flat white, lattes became more popular in the 1980s.

So which one should you order next time? Well, if you feel like drinking less but experiencing a stronger espresso kick with a silky texture, try a flat white.

But if you’re more into the milky espresso flavor, a latte would be a better choice.